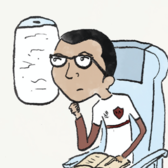 I’m the kind of guy that likes helping out other people.

Sometimes, that means putting my own things aside to do so.

And when I do that, I put myself in a bind because I am prioritizing other people’s things over mine causing me more stress later on.

Lately, I’ve been saying “no” more because I have more responsibilities. I’ve been spreading myself too thin and I don’t have the bandwidth at this point.

I feel bad when I am unable to help out and I hope people understand but I am starting to get better at prioritizing what matters.

And more importantly, putting myself first.

Some Cool Stuff to Check Out

In Joshua Tree, Are 1,818 Airbnbs Too Many? - The New York Times — www.nytimes.com A short-term rental gold rush is fueling concern for the area’s signature trees and debates about whether the nature of life in the desert of southeastern California is changing forever.

Why You Hate Answering the Phone So Very, Very Much — www.vice.com Phone calls – like any social interaction – make some people incredibly anxious.